Archive for the ‘BinDiff’ Category 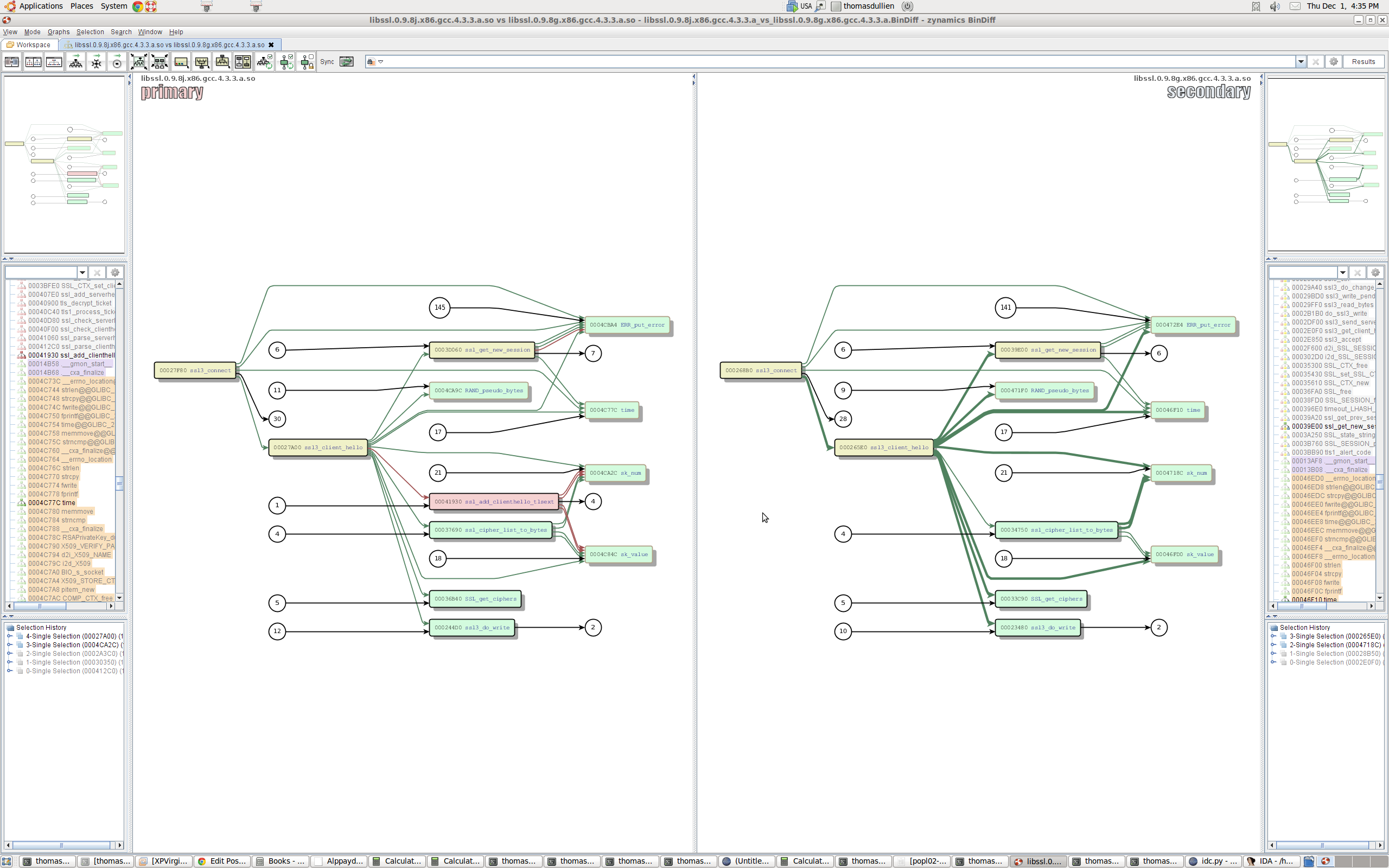 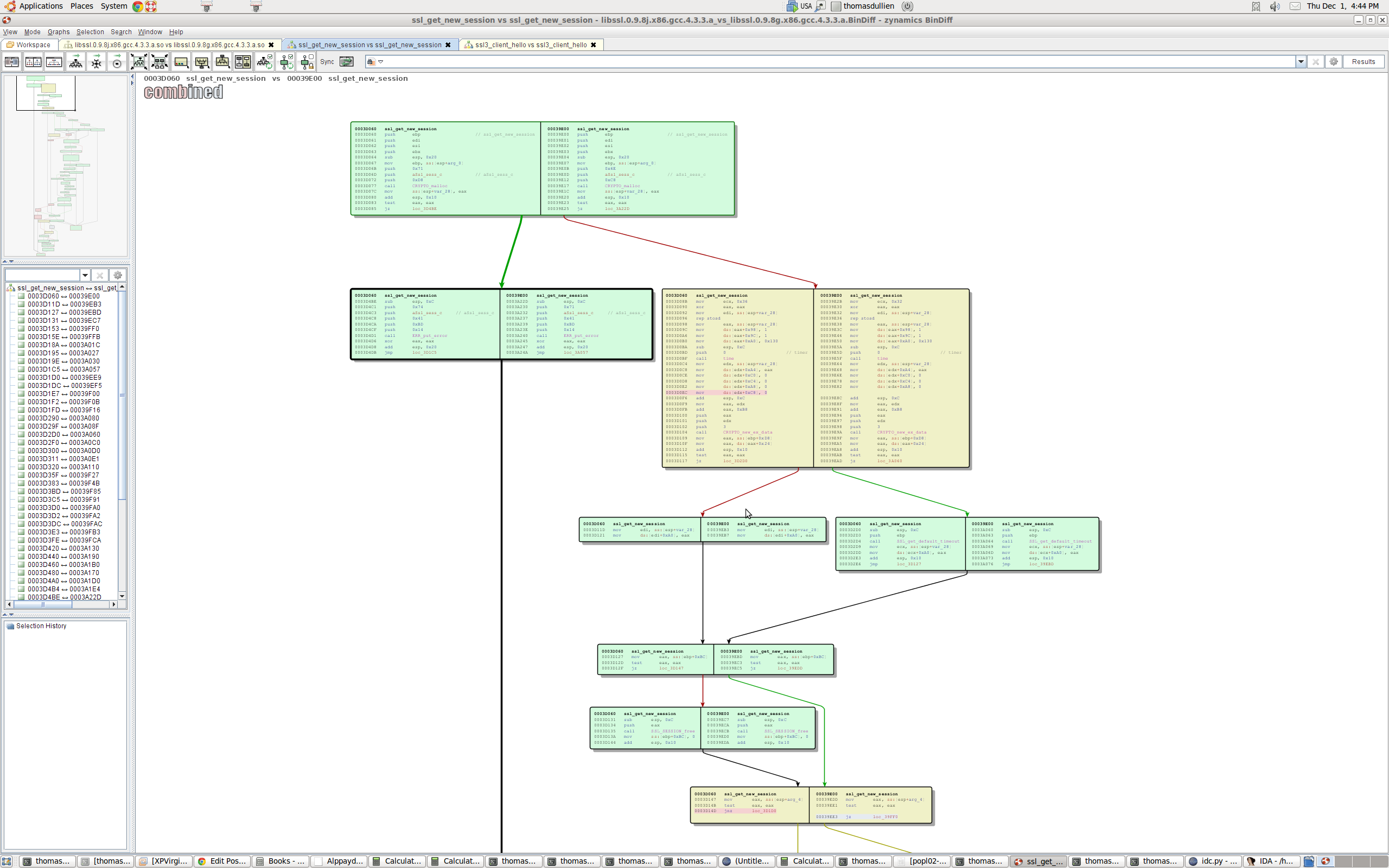 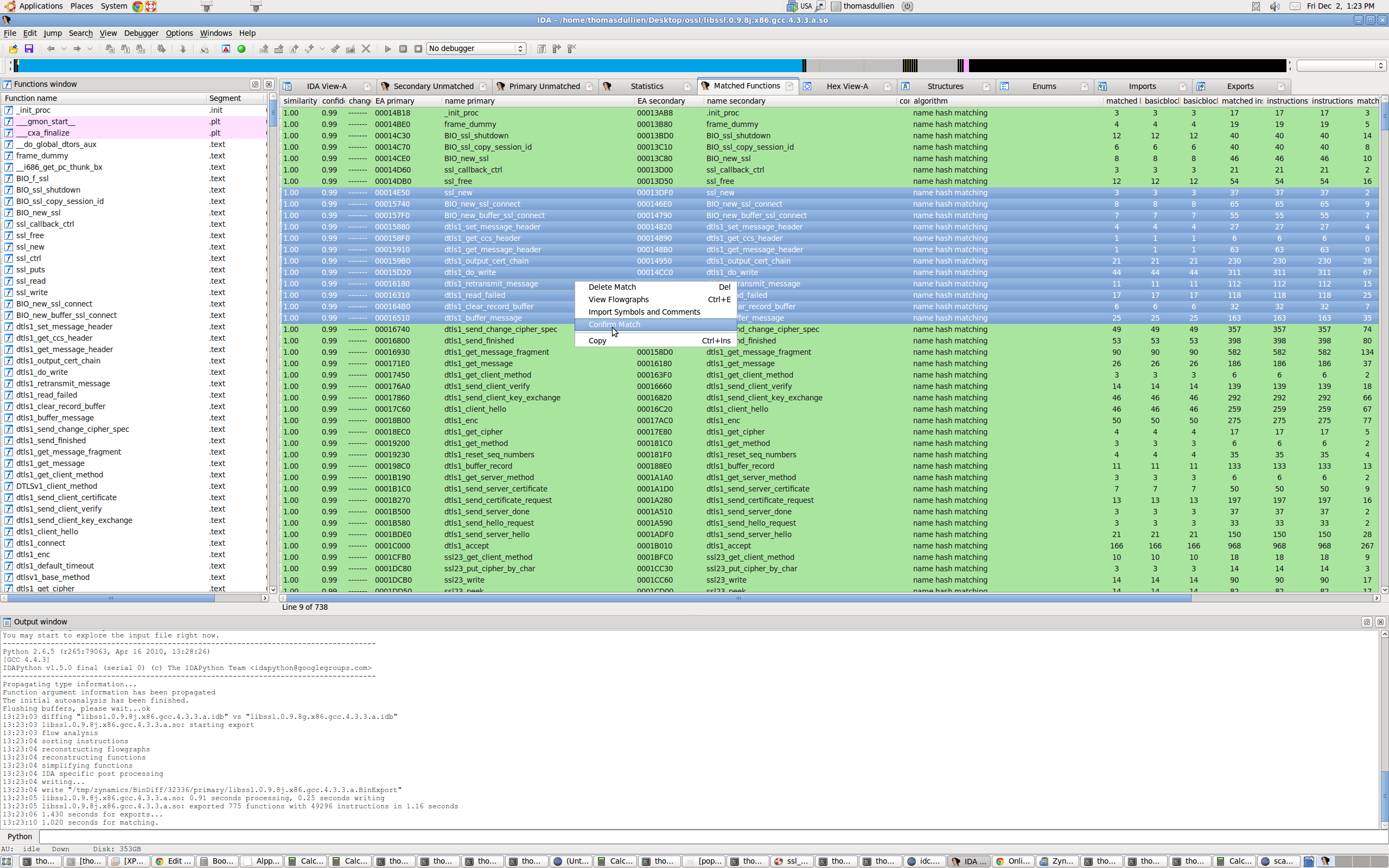 Hi there. I am one of the developers working on VxClass and the signature generation component in particular. However, working in a small company such as zynamics also means I get to do tons of other stuff, like preparing installer packages and other behind-the-scenes work.
So, in my first post I have the pleasure to announce a new version of our binary comparison tool: BinDiff 3.2.1. As the version number implies, this is mostly a bugfix only release, but with one important difference: As of now, all customers that place an order for BinDiff, automatically receive Debian GNU/Linux packages as well as the familiar Windows Installer package. Supported Debian-based distributions include:

Please note that for the Linux packages, we only support using BinDiff with Hex-Rays IDA Pro 6.0. For the Windows version we support the three latest versions of IDA Pro (5.6, 5.7 and 6.0, respectively).

This is how BinDiff looks on Linux: 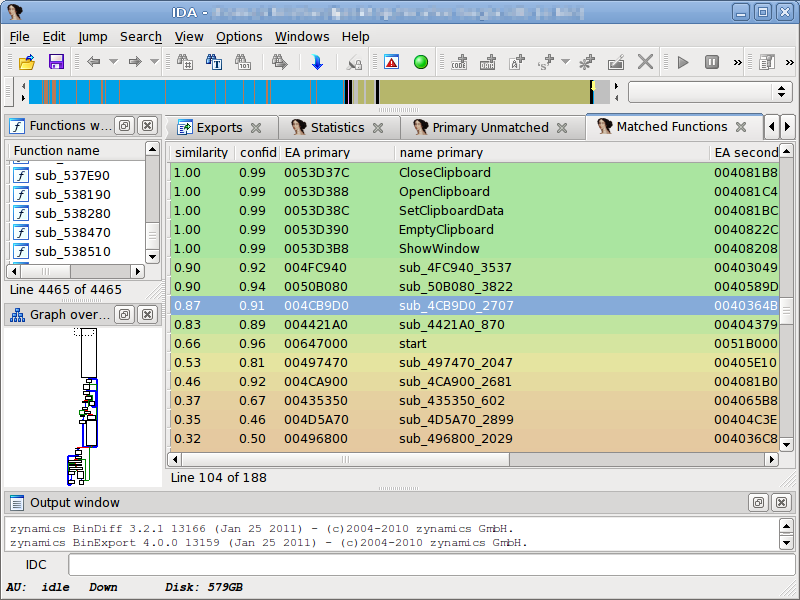 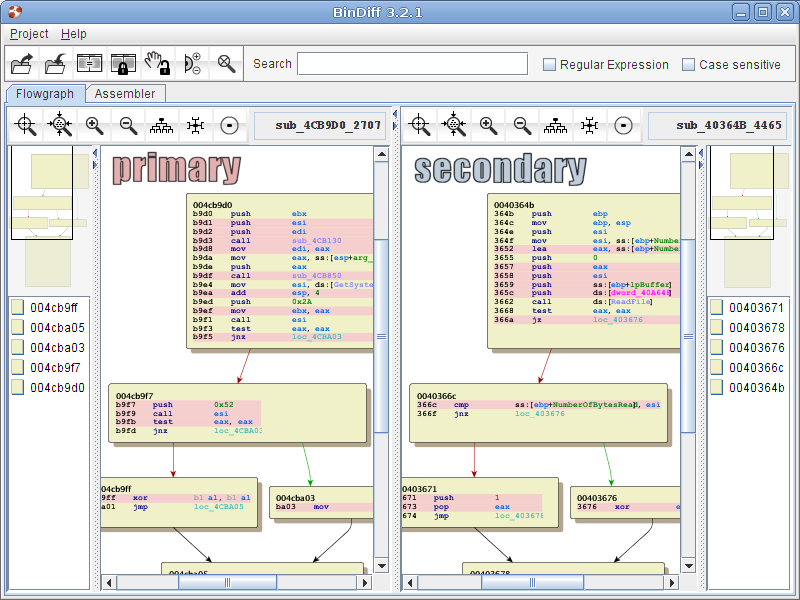 You can order BinDiff over the usual channels: e-mail.

This concludes my first post here, have fun diffing!

A lot of excellent stuff has been written about Microsoft’s RTTI format — from the ISS presentations a few years back to igorsk’s excellent OpenRCE articles. In the meantime, RTTI information has “spread” in real-world binaries as most projects are now built on compilers that default-enable RTTI information. This means that for vulnerability development, it is rare to not have RTTI information nowadays; most C++ applications come with full RTTI info.

So what does this mean for the reverse engineer ? Simply speaking, a lot — the above-mentioned articles already describe how a lot of information about the inheritance hierarchy can be parsed out of the binary structures generated by Visual C++ — and there are some pretty generic scripts to do so, too.

This blog article is about a slightly different question:

How can we recover full UML-style inheritance diagrams from executables by parsing the RTTI information ?

To answer the question, let’s review what the Visual C++ RTTI information provides us with:

Now, why is this useful ? Aside from the amusing notion that “oh, hey, inheritance relationships are POSets“, it also provides us with a simple and clear path to generate readable and pretty diagrams: We simply calculate the inheritance relation from the binary and then create a Hasse Diagram from it — in essence by removing all transitive edges. The result of this is a pretty graph of all classes in an executable, their names, and their inheritance hierarchy. It’s almost like generating documentation from code 🙂

Anyhow, below are the results of the example run on AcroForm.API, the forms plugin to Acrobat Reader: 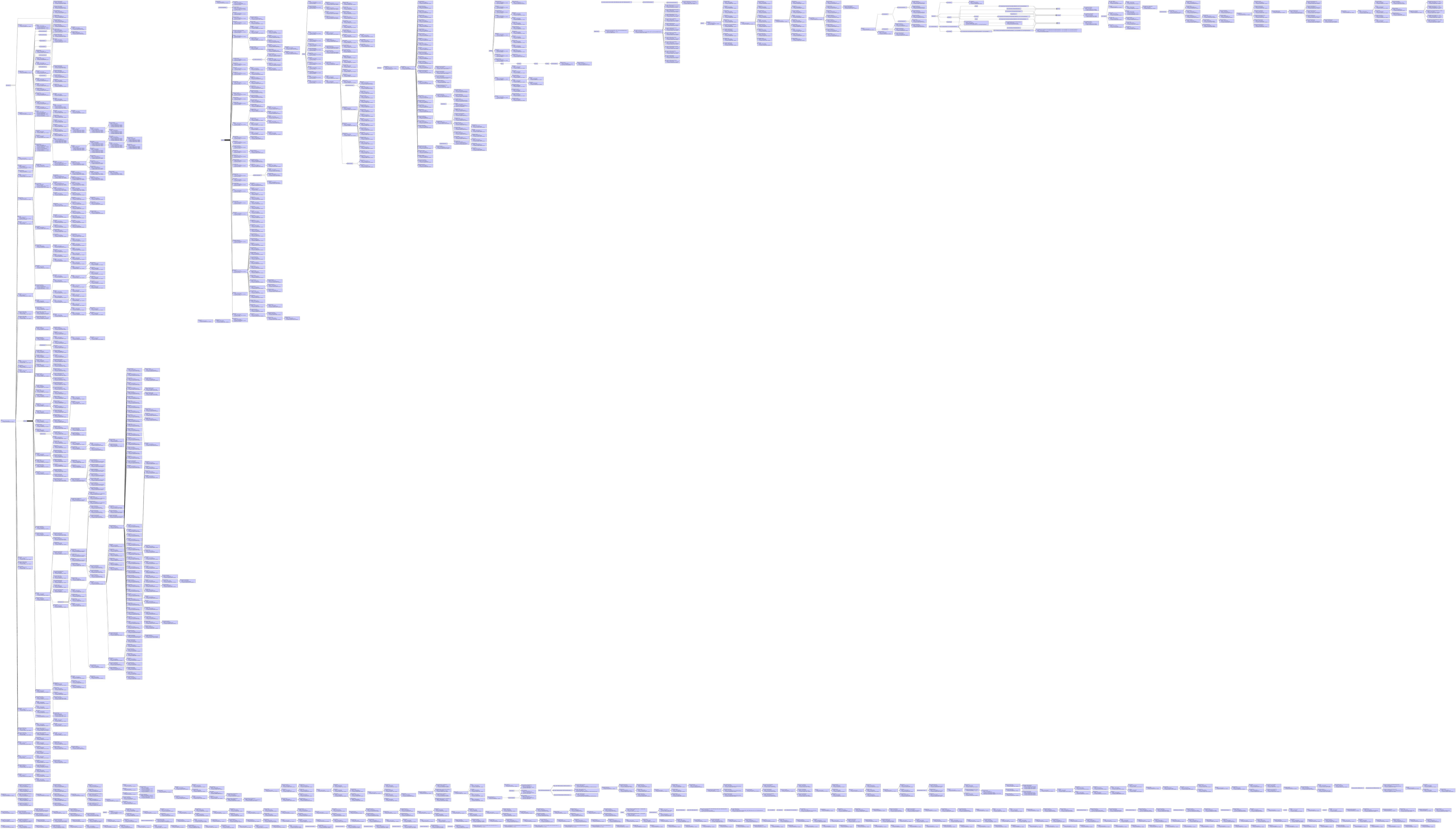 The full inheritance diagram of all classes in AcroForm

A more interactive (and fully zoomable) version of this diagram can also be viewed by clicking here.

For those of you that would like to generate their own diagrams, you will need the following tools:

We are pleased to announce the official BinDiff 3.2.0 release. zynamics BinDiff is the leading comparison tool for binary files, that assists vulnerability researchers and reverse engineers all over the world to quickly find differences and similarities in disassembled code. BinDiff uses a unique graph-theoretical approach to compare executables by identifying identical and similar functions, which is resilient even against changes in binaries introduced by different compilers and optimization settings.

With BinDiff one can conveniently identify and isolate fixes for vulnerabilities in vendor-supplied patches. One can also port symbols and comments between disassemblies of multiple versions of the same binary or gather evidence for code theft or patent infringement. BinDiff 3.2.0 compares binary files for x86, MIPS, ARM, PowerPC, and any other CPU architectures supported by IDA Pro. BinDiff displays function matches between two binaries in a clear way and easily ports function names, anterior and posterior comment lines, standard comments and local names from one disassembly to another.

So, what are the new features in zynamics BinDiff 3.2.0? In a nutshell, besides many bug fixes and a better IDA integration, the quality of the diff engine has been improved. Also, this version is shipped with a new C++ based exporter plug-in for IDA which unifies the export process between BinNavi and BinDiff. For more information, refer to the previous blog post titled “BinDiff 3.2 public beta phase starts today“, or take a look at the complete change list, which can be found in the manual. 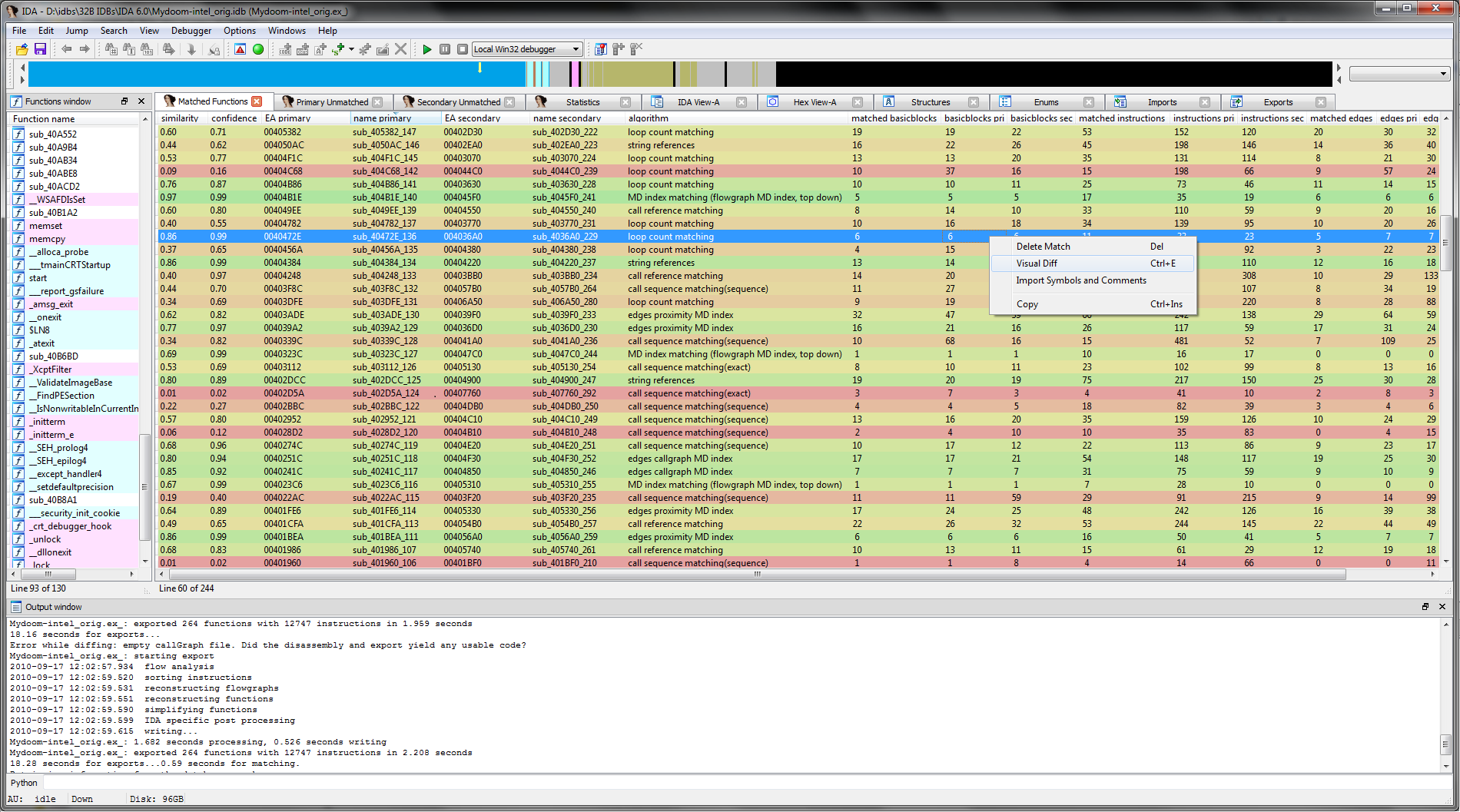 The previous image shows the new “Matched Functions” view with a diff of two MyDoom binaries that were build by different compilers and with different optimization settings. Each match is colored from green to red according to the respective similarity in both binaries. 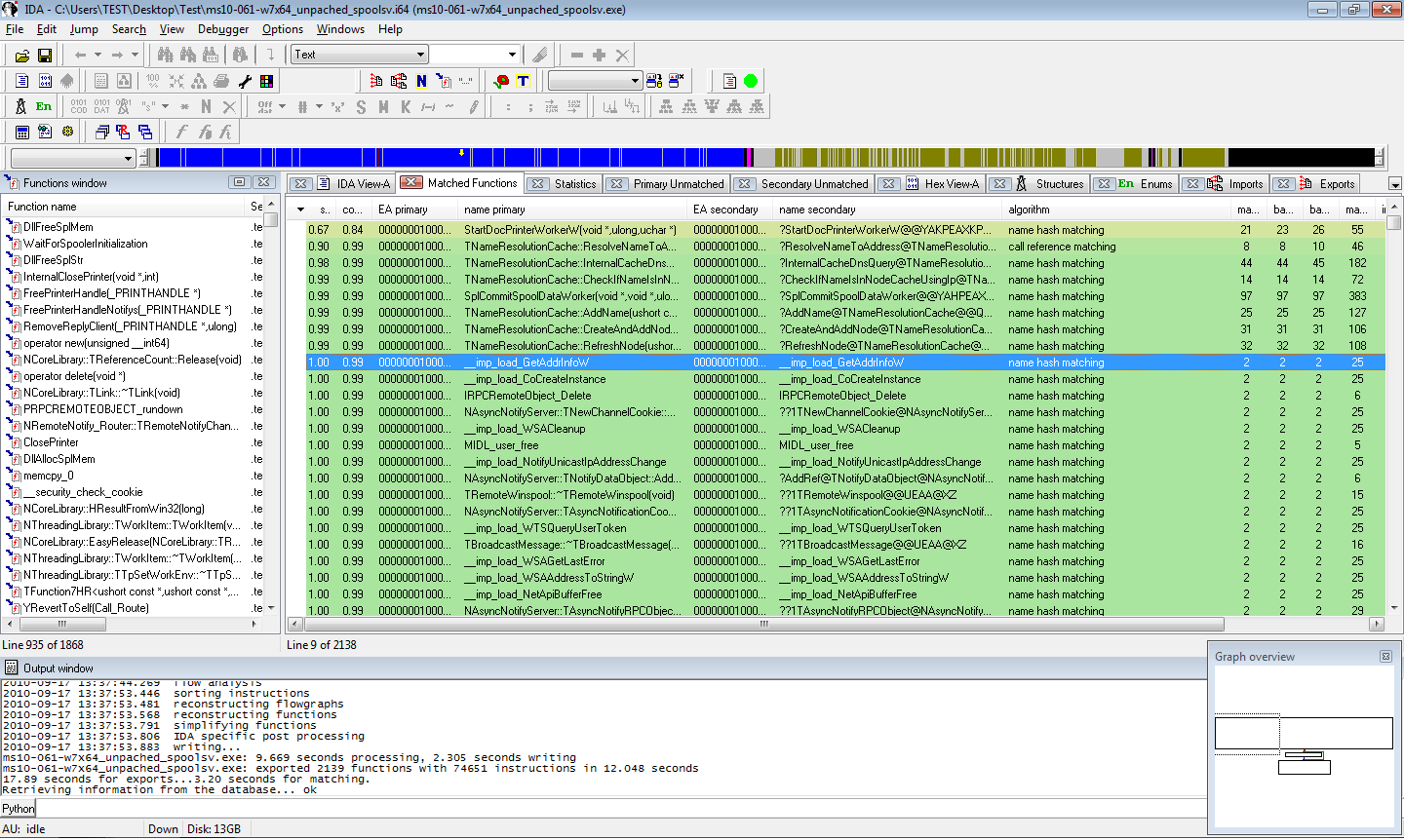 The image above shows the “Matched functions” view in IDA of a patch diff (MS-10-061 for Windows 7 x64). Changed functions can be easily spotted by sorting the table by similarity. 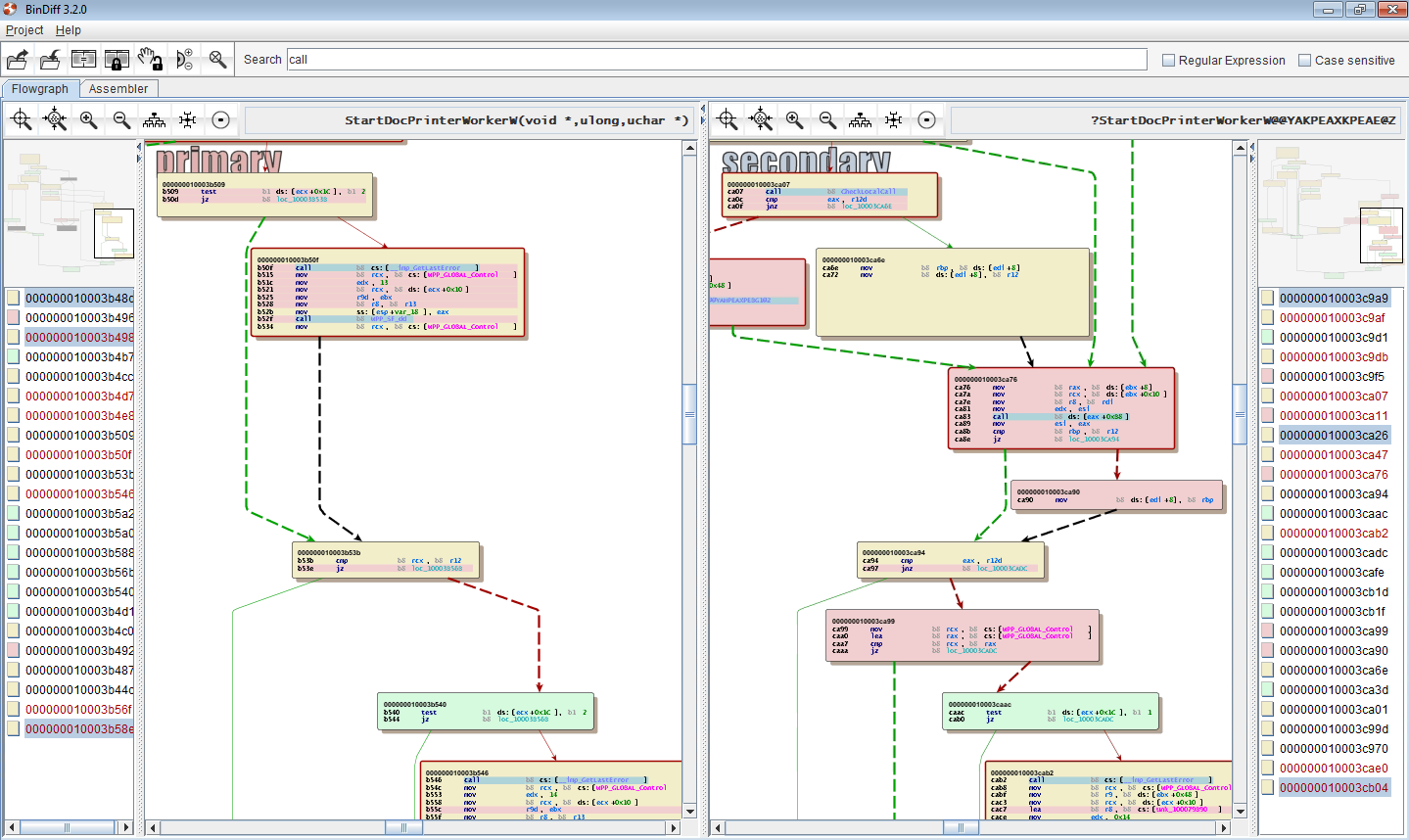 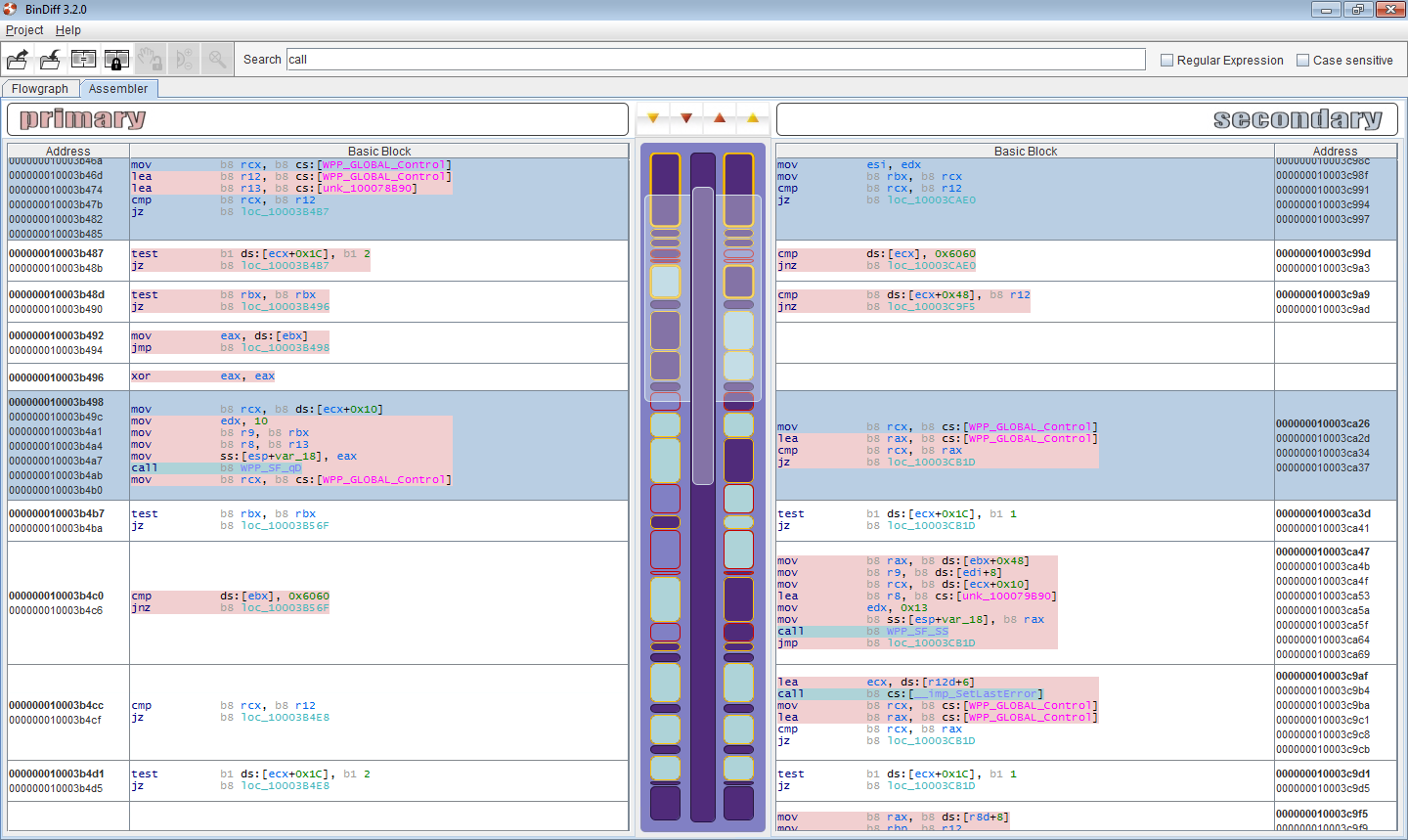 If you have any questions, please leave a comment or contact the zynamics support. If you are interested in a trial version, please write an email to info@zynamics.com. More screenshots and an order form can be found here.

Because this is my first post here I would like to introduce myself briefly. I have been working for zynamics since 2006 and my primary task is Java development. My main product responsibilities are the VxClass similarity graph visualization applet, parts of BinNavi and the complete BinDiff GUI.

Today we are officially starting the BinDiff 3.2 public beta phase. Besides many bug fixes the quality of the diff engine has been improved. Also, this version is shipped with a new C++ based exporter plugin for IDA which unifies the export process between BinNavi and BinDiff.

We also increased our test database of IDB samples for stress testing the exporter and the BinDiff core engine to ~10GB. This includes large non-malicious samples (CISCO router images, Firefox, Acrobat, …), patch diff samples (Microsoft, MMO games, …), a huge selection of small but heavily obfuscated malware samples and some really obscure platforms. Every IDB we have ever received with a bug report or feature request is included in this database – please do keep ’em coming! In addition to that our distributed BinDiff engine integrated with zynamics VxClass, our malware clustering product, churns through gigabytes of fresh malware samples each month.

If you are a zynamics customer and interested in participating in the beta phase, please write an e-mail to support@zynamics.com. Any kind of feedback, feature requests or bug reports are very much appreciated.

Along with RECon, the single most important date in the reverse engineering / security research community is the annual Blackhat/DefCon event in Las Vegas. Most of our industry is there in one form or the other, and aside from the conference talks, parties and award ceremonies, there’s also a good amount of technical discussions (in bars or elsewhere) that takes place.

This year, a good number of researchers/developers from the zynamics Team will be present in Las Vegas — alphabetically, the list is:

So, if you wish meet any of the team to discuss reverse engineering, our technologies, our research, or the performance of the Spanish or German football team at the last world cup, do not hesitate to drop an email to info@zynamics.com — Vegas is always chaotic, and scheduling a meeting will minimize stress for everyone that is involved.

Specifically, the following topics are specifically worth meeting over:

then do not hesitate to drop us mail — we’ll gladly show/explain what our tools/technologies can do.

Everybody is convening in San Francisco next week for RSA2010 it appears — the big annual cocktail & business card exchange event. If you are interested in any of our technology (automated malware classification, automated signature generation, BinDiff, BinNavi) and would like to meet up with me, please contact info@zynamics.com 🙂

Over the last several years, most of the zynamics crew has kept their own (personal) blogs, and frequently, topics that were of interest to the reverse engineer were scattered over several different blogs. It was not unusual to have to search through my blog, Ero’s blog, SP’s blog, or Vincenzo’s blog on the quest to finding a particular piece of information.

Also, at least one of those blogs was updated only sporadically (primarily … mine), and intermingled heavily with non-technical rants on the state of the world or the quality of the food in some random pub.

This situation was clearly untenable — and we therefore decided to pool all our reverse-engineering (and zynamics)-related stuff in one place.

On this blog, you will find posts regarding the following topics:

So, enjoy the posts, and tell a friend!