On February 3rd I will be speaking at Black Hat DC. The talk is about fuzzing. Today Microsoft has its SDL, Abobe has apparently started fuzzing its own products and other companies are doing the same as well. The bottom line is that fuzzing is getting harder for us. In the talk I will explain how to create a new type of fuzzer by combining static analysis metrics and dynamic analysis techniques. This new approach will ease the process of fuzzing by totally removing the data-modeling part that is usually necessary with generation-based fuzzers. At the same time it will have better results than mutation-based fuzzers. I have written about some of the techniques/metrics used in the fuzzer in my previous blog posts. So to have a taste of the talk here are a few links: cyclomatic complexity, loop detection and code coverage.

Anyway if you happen to be in DC during Black Hat or in NYC a few days after (4 -7 February) and you want to talk with me about:

Send me an email!

I have already explained in my previous posts how much I love static analysis, nonetheless sometimes you have to get your hands dirty and use a debugger. In this post we will take a look at the BinNavi debugging APIs and how to use them to create a code coverage plugin. In this blog post I have spoken about how to use BinNavi “without BinNavi” so in order to fully understand the rest of the post it is probably better to take a look at it.

Of course those addresses need to be relocated at run-time,  therefore the next task is to locate the module in-memory and relocate each address accordingly. Intuitively in order to do so we need to attach to the remote process and look for loaded modules until we find the one we are interested in:

if self.debugger is None:
return None

while self.module is None:
continue

We suspend the target process here because before executing the process we first need to relocate the addresses and set breakpoints. We will resume it after both operations are completed.

As you might have noticed before attaching to the remote target we register a listener for the target process.
There are a few types of listener classes useful for our purposes, most notably IDebuggerListener and IProcessListener. Both of them are notified when common debugging events happen. To learn more about those listeners  I suggest you to take a look at the documentation.
In our class we implement a few methods of the IProcessListener class which are called by the dispatcher inside BinNavi when certain messages are delivered from the remote debugger.

The first method is called when the debugger attaches to the target process and retrieves some basic information on it. We need to resume the process at that point as the debugger after the initialization suspends it(notice that the call to suspend() in the previous code snippet happens after we locate the module in memory, that is after we call resume() here).

The second method is called whenever a new image is loaded in the process address space. In our code as soon as we find the module we are looking for we don’t care about other images.

Now that we have the module in-memory we can relocate the addresses:

I lied when I said we need to set breakpoints, in fact BinNavi takes care of that internally by the means of a TraceLogger!

Echo breakpoints are a ‘lightweight’ version of regular breakpoints. In essence, echo breakpoints get removed after they are initially hit. This leads to better performance of the application that is being debugged, as execution speed of a particular path is only slowed down during the -first- execution.

So first we set up the tracer and then we create the trace. A trace can have a listener which is notified when a new event is added; we use such a listener to keep track of the blocks touched during the execution.

When a new event is added, we retrieve the address and update the address counter accordingly.
At this point we are all set, and we can get the code coverage score:

Let’s run it then! On the target machine we run:

on the local machine

And here’s a screenshot 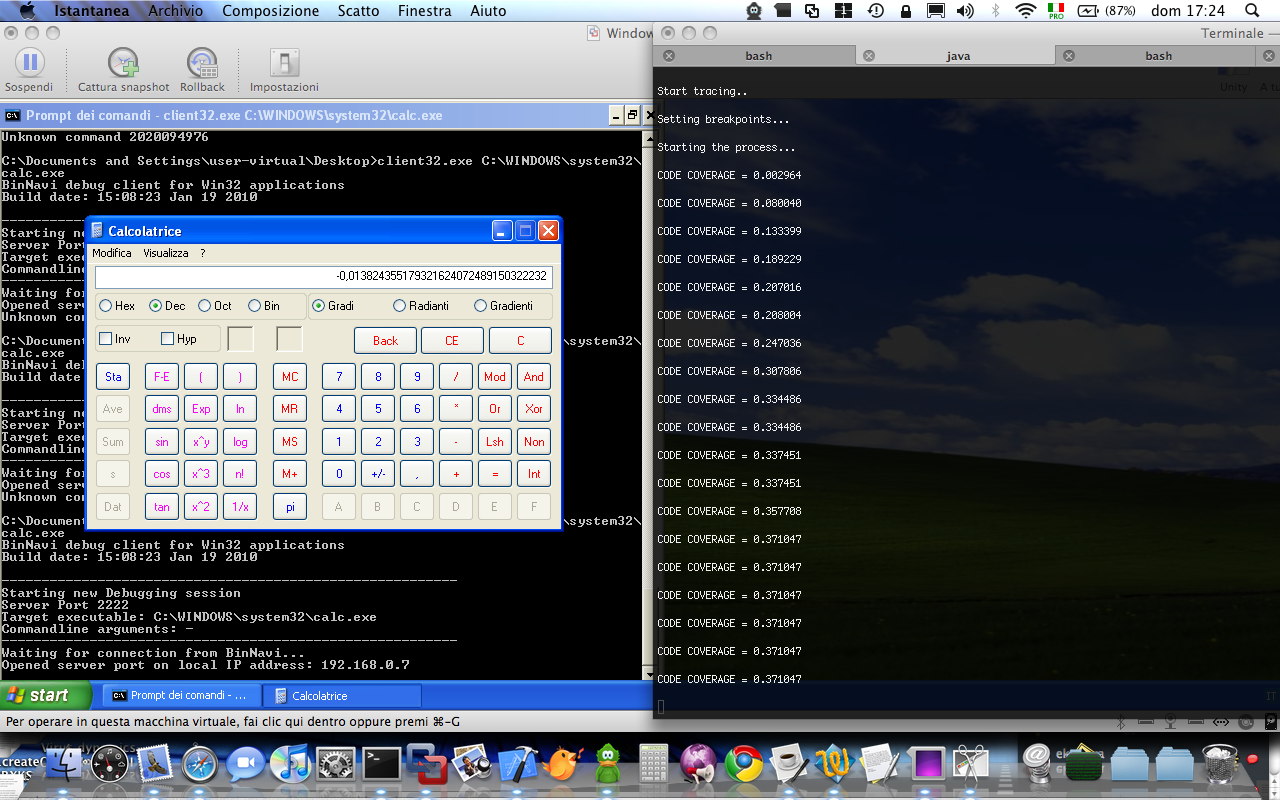 That’s all for now.

Last November Michael Meier of Dortmund University invited me to give a guest lecture on a topic of my choice in his class about reactive security.  The topic we decided on was formal methods in reverse engineering. January 20th was the date of my guest lecture.

I was a bit nervous because I knew the students knew very little or nothing about formal methods and reverse engineering. I decided not to scare them away with assembly code or heavy math and to keep things general instead. The idea was to present current problems in reverse engineering caused by growing size and complexity of today’s software and how formal methods might be able to help us overcome these problems.

In the end I decided to give a brief introduction to abstract interpretation, meta languages, dynamic instrumentation, and taint tracking as four potential ways of cutting down on complexity which are all quite different.

I think the talk went rather well and I think I made the right decision with the topic. The students asked me some good questions during and after the talk and I like to believe that I did not bore them to death.

The slides of my guest lecture are available here although they are unfortunately in German language.

Posted in Other | 3 Comments »

The first improvement we made is to log more information about the state of the debugged program. For each executed instruction, BinNavi 3.0 is not only recording the address of the instruction but the values of all CPU registers when that instruction was executed. If any of the registers point to valid memory, up to 128 bytes starting from where the register is pointing to are recorded too. All of this information is stored in the database and can later be analyzed by the user.

The next improvement we made is to give the user the option to create a new trace record while the debugger is already in trace mode. In the past it was only possible to start trace mode for a given graph and to turn it off again later. In BinNavi 3.0 it is possible to switch the trace log which receives recorded events on the fly. This is very useful in any situation where you want to discard all trace events before a given moment or to sort trace events into different trace logs.

Imagine you want to record how an instant messenger program sends a message. You can start the instant messenger program and begin to record a trace. At first, all the breakpoints of the random background noise (like GUI handlers) are hit. These events are not important and go into the first log which is later discarded. Once all unimportant breakpoints have been hit you can tell BinNavi to put all further trace events into a new trace log. Then you can send an IM message. The trace events triggered by the message sending code are all put into the second list. To find the code that processes a received message you can do the same again. Tell BinNavi to put all trace events that arrive from now on into a new trace list, then send a message to your IM client.

The result of all of this is shown in the following screenshot which shows the results of a Pidgin debugging session. What I did to produce these trace logs was to start Pidgin and switch the attached debugger to trace mode. The first trace log (Background Noise) contains all the breakpoint events that were triggered immediately or when I did unrelated things like move my mouse over the Pidgin window. Once the background noise events stopped I spawned off a new trace (Opening the chat window) and opened a chat window. This second trace contains only those events that were triggered while the chat window was opened. Then I spawned off another  trace (Sending message) and sent a message to someone. Afterwards I waited for an incoming chat message from the person I was chatting with.

In the end I had four neatly separated trace logs which contain trace events for exactly those functions that are responsible for opening a chat window (second log), for sending a message (third log), and for receiving a message (fourth log).

While the ability to sort trace events into different trace logs on the fly is incredibly useful, it is not really useful in situations where the user does not know when exactly to create a new log. To make it more comfortable to find pieces of code in these situations, we have added the option to combine recorded traces. It is now possible to combine previously recorded traces using set-union, set-intersection, and set-difference operations.

Especially the set-difference operation is very useful in practice. Imagine you have a program that accepts input and performs a sanity check on the input. Now you can simply record a trace of a program execution where you give the program well-formed input and another trace where you give the program malformed input. Doing a set-difference on the two recorded traces shows you exactly where the program traces deviate and you can easily find the part of the code that checks whether the input was wellformed or not.

The last improvement we made to Differential Debugging is to give the user the option to configure how often trace events at individual addresses are recorded. In the past, each address was only recorded once. This was useful to get a quick overview of the executed code but in other situations this was simply not good enough. We have had users who wanted to generate more complex trace logs that record trace events every time an instruction is executed. This is useful if you want to profile code for speed or if you want to do code coverage that considers how often an instruction is executed. Using Differential Debugging in BinNavi 3.0 this is now possible.

That’s it for Differential Debugging in BinNavi 3.0. These improvements should make it much easier for users to find exactly those parts of a debugged program they are looking for.

Over the last several years, most of the zynamics crew has kept their own (personal) blogs, and frequently, topics that were of interest to the reverse engineer were scattered over several different blogs. It was not unusual to have to search through my blog, Ero’s blog, SP’s blog, or Vincenzo’s blog on the quest to finding a particular piece of information.

Also, at least one of those blogs was updated only sporadically (primarily … mine), and intermingled heavily with non-technical rants on the state of the world or the quality of the food in some random pub.

This situation was clearly untenable — and we therefore decided to pool all our reverse-engineering (and zynamics)-related stuff in one place.

On this blog, you will find posts regarding the following topics:

So, enjoy the posts, and tell a friend!