we – that would be Andy and Felix – are student interns at zynamics in Bochum. We both study IT-Security at the University of Bochum in our 8th semester and have both been with the company for several years now.

For the last half year we have been working together on a WinDbg kernel-debugging interface for zynamics’ reverse engineering tool BinNavi. After our latest bug fixes and code improvements we now feel ready to announce that this piece of software has finally reached alpha status. It is now almost feature complete but still got some rough edges and known bugs.

What does this mean to you as a (maybe future) BinNavi customer?

You will be able to use all the advanced debugging features of BinNavi for remote Win32 driver and kernel debugging. All you need to have is a machine with BinNavi and the Microsoft Debugging Tools for Windows installed and – of course – a second Win32 (virtual) machine you want to debug. Given these prerequisites, you can directly start to explore the vast and dark realms of Win32 kernel land from an easy-to-use, nice and cozy GUI. There are probably other tools out there to do this. But only BinNavi provides you with all the powerful features of our Differential Debugging technology. Please see Sebastian’s post from a few weeks ago to understand why we are so excited to bring this technology to ring0.

To give you an idea of how kernel debugging with BinNavi looks like, we took three screenshots. The first one shows the driver selection dialog that BinNavi displays right after attaching to a target machine. The second one displays a function trace of mrxsmb.sys on an idle Windows XP machine connected to a network. The 150 functions called during our trace are enumerated in the lower mid, while the recorded register and memory values for each call are displayed in the lower right. In the third screenshot you can see us single-stepping a random function in mrxsmb.sys. 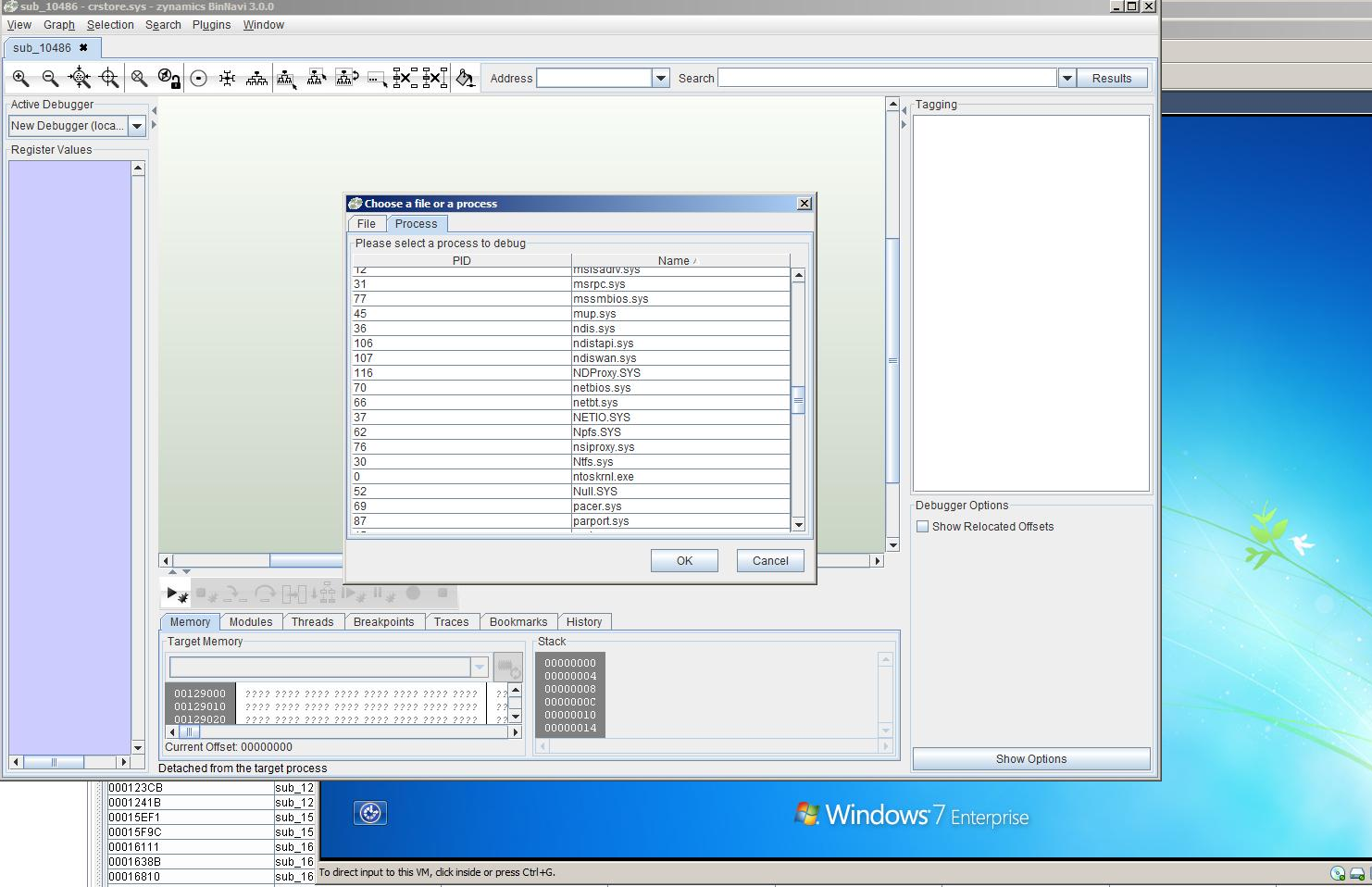 Selection of the target driver

Once we are done polishing our code, we will post here again on this site to demonstrate how this technology can facilitate the process of finding the interesting code parts in Win32 drivers. Specifically, we will use Differential Debugging to pin point the code parts that are responsible for password processing inside the driver of a certain closed-source HDD encryption product. This is interesting both for writing a password brute-forcer and for checking for implementation mistakes.

If you are an existing BinNavi costumer and want to play a bit with the current alpha version, just let us know – we will be happy to supply you with the latest build. Beside that, the final version will be shipped to all customers with one of the next BinNavi updates.

One Response to “Win32 Kernel Debugging with BinNavi”